Randy Ringhaver likes to call the Lift Trucks division Ring Power’s leading economic indicator. Just about every kind of business needs to handle and store materials at some point, he reasons, and will need some kind of forklift to do so. In turn, when forklift sales perk up, it’s an important signal that the overall economy is about to follow suit.

In 1974, forklift sales were indeed an indicator - of Ring Power Corporation’s future.

L.C. Ringhaver announced the formation of a new “Lift Truck” division October 1 that year. Being the 12-year-old company’s first major corporate expansion was significant in itself. But the real significance lay in how Ring Power embraced the opportunity.

Selling and servicing forklifts was an idea that originated with Caterpillar® in Peoria, Illinois. Having purchased Towmotor Corporation and its line of lift trucks in the mid-1960s, Caterpillar® was ready to offer its existing network of heavy equipment dealers new sales channels for the material handling product line by the mid-1970s.

L.C. Ringhaver saw the new product line as a fresh business opportunity to be seized - and a chance to expand his customer base considerably. Never mind that neither he nor his colleagues knew much about forklifts and what it might take to sell and service them, Ring had made the leap from shrimp boats to bulldozers; how hard could it be? If adding them to the company’s repertoire made business sense and could help better serve or acquire new customers, Ring was all for it. 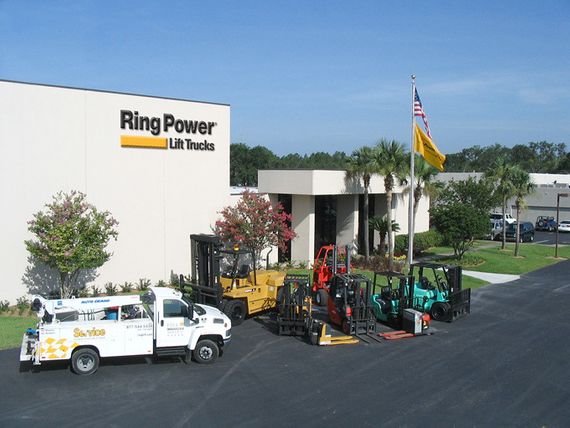 For the Ring Power Lift Truck Division, success had been steady over the years, but - as always - there was a learning curve to climb at first.

“There was a much different sales strategy. Initially, we tried to apply Cat® techniques, but then we had to adjust,” he adds. Over time, Ringhaver adds modestly, “we’ve made a pretty good business out of it.”

There were no shortage of candidates, but in the end Caterpillar® determined L.C. Ringhaver was the best candidate and awarded Ring Power Corporation the appointment as a full- line Caterpillar® dealer in 1962. Ring Power Corporation grew extensively under Ring's leadership, adding multiple new divisions and building new facilities across the state of Florida in places like Jacksonville, Ocala, and Tampa.

One Company. One Vision.

Lance's retirement in December 2003 afforded the opportunity to combine the two sister companies into one organization and Caterpillar® approved the merger of the two dealerships as Ring Power. Today Randy Ringhaver serves as President and Chairman of Ring Power Corporation.

Ring Power also has eight facilities outside of Florida - Rhode Island, New Jersey, the Carolinas, Georgia, Texas and California - to serve the needs of other specialized industries and customers.

From our earliest beginnings as DESCO, a shrimp boat manufacturer in St. Augustine, Fla. in the 1950s, our focus has always been on our customers.

Ring Lift expanded it's footprint to the South Florida market

Ring Power Lift Trucks reached an all-time high in demand for parts and opened Parts Depots in our outlying markets.

Increased representation on the west coast of Central Florida by adding a facility in St. Pete

Ring Power Corporation has become one of the largest Caterpillar® dealers in the Southeastern United States through dedication to the mission of customer service. In order to preserve the "Customers First" reputation that Ring Power was built on, we continually train our employees and work closely with our customers to assure complete satisfaction, especially after the sale.

WHAT REMAINS UNCHANGED AFTER 55 YEARS? IT'S THE CHARACTER, AND CULTURE, AND THE COMMITMENT OF OUR PEOPLE.